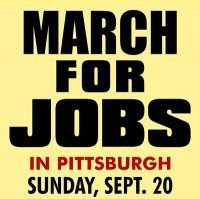 On Sunday, Sept. 20 a National March for Jobs will step off from the historic Hill District in Pittsburgh, PA just prior to the G20 summit declaring that the unemployed, the homeless, the hungry and the poor must no longer be invisible and silent. This is particularly urgent for young workers as highlighted by New York Times columnist Bob Herbert this week. (www.nytimes.com/2009/08/11/opinion/11herbert.html)

Herbert wrote, “Two issues that absolutely undermine any rosy assessment of last week’s employment report are the swelling ranks of the long-term unemployed and the crushing levels of joblessness among young” workers. … The plight of young workers, especially young men, is particularly frightening. The percentage of young … men who are actually working is the lowest it has been in the 61 years of record-keeping, according to the Center for Labor Market Studies at Northeastern University in Boston.

“Only 65 of every 100 men aged 20 through 24 years old were working on any given day in the first six months of this year. … For male teenagers, the numbers were disastrous: only 28 of every 100 males were employed in the 16 through 19-year-old age group. For minority teenagers, forget about it. The numbers are beyond scary; they’re catastrophic.”

Herbert called the 0.1 percent unemployment drop in July “wildly deceptive,” because the decline was “not because more people found jobs, but because 450,000 people withdrew from the labor market. They stopped looking, so they weren’t counted as unemployed.”

Herbert noted that "The country has lost a crippling 6.7 million jobs since the Great Recession began in December 2007. No one is predicting a recovery in the foreseeable future powerful enough to replace the millions of jobs that have vanished in this historic downturn."

The magnitude of the jobs crisis is giving momentum to the September 20 National March for Jobs. On Monday, August 10, the San Francisco Labor Council unanimously passed a resolution endorsing the march, which reads in part:

"Whereas, there is no recovery in sight from the current economic crisis. Although government measures have enabled Wall Street to pocket hundreds of billions of taxpayer dollars, still unemployment, foreclosures and poverty continue to soar; and

Whereas, in September the eyes of the world will be on Pittsburgh, where the G20 countries will meet on what to do about the global crisis, and this will be an excellent opportunity for labor and its allies to present OUR workers’ recovery agenda; and...

Resolved, that the San Francisco Labor Council endorse the March for Jobs in Pittsburgh on September 20, 2009, and the Global Week in Solidarity with the Unemployed, on the occasion of the G20 summit in that city." (read the full resolution at : http://www.bailoutpeople.org/sflc.shtml)

The ILWU (International Longshore Workers Union) Local 10 and the Letter Carriers Union Local 214 have also passed similar resolutions in support of the March for Jobs.

There is much work to be done in the next few weeks. Here's how you can help:

* We need your help! Funds are urgently needed to help subsidize buses and vans and to assist with organizing costs for the "March for Jobs." - http://bailoutpeople.org/donate.shtml

Bail Out the People Movement

Posted by Action Center For Justice at 8:14 PM