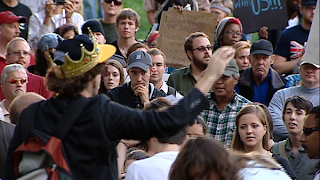 On Saturday, October 8, over 500 people of all ages and races joined together at Old City Hall and marched on Bank of America's HQ in uptown Charlotte, NC. The group Occupy Charlotte, part of the nationwide Occupy Wall St Movement, protested and spoke out against corporate greed.

Participants then marched back to Old City Hall for a General Assembly to form working groups and begin setting up the permanent Occupy Charlotte encampment.

Another Assembly of occupation participants was held at 7:00 pm where the working groups gave reports.

About three dozen protesters stayed at the encampment overnight and plan to  stay as long as it takes to achieve economic justice. They have vowed to stay for at least a year and will be a major presence during the Democratic National Convention.

Spreading protests reach in No. 2 US banking city
http://www.canadianbusiness.com/article/49645--spreading-protests-reach-in-no-2-us-banking-city

Posted by Action Center For Justice at 9:13 PM