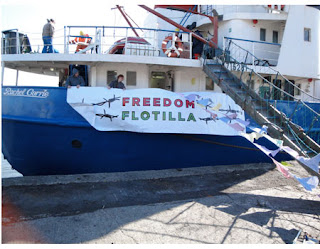 AMMAN - Volunteers on the MV Rachel Corrie are not trained soldiers, and they are fearful of being attacked by the Israeli army – but they are determined to deliver humanitarian aid to Gaza.

“Of course there is worry, but this is an amanah (trust bestowed upon us) to deliver the aid to Gaza,” said Perdana Global Peace Organisation representative Shamsul Akmar in an interview.

He is on board the sole ship making its way to Gaza.

Israel’s attack on the six aid ships in international waters on Monday resulting in nine deaths only made those on Rachel Corrie more determined to carry out their amanah.

Rachel Corrie was supposed to be part of the flotilla but she got left behind due to delays and some “suspicious stringent checks” by port authorities at several places, said Shamsul.

There are 19 people on board and they have been travelling for 20 days.

Other than Shamsul, who is the head of the delegation, there are five other Malaysians – Matthias Chang, Parit MP Nizar Zakaria, activist Ahmad Faizal Azumu and TV3 crew members Halim Mohamed and Jufri Junid.

Also on board is a strong Irish delegation with Nobel Peace Laureate Mairead Corrigan Maguire.

There are six crew members, a captain and a chief engineer.

Shamsul said there are a number of possible scenarios:

> Israel may let Rachel Corrie through

> Israel may become aggressive and board the ship; and

> those on board the ship may be shot by Israeli forces

Shamsul said that if Israel stopped the ship in international waters, but the ship was forced away, “we collectively feel we should stay there for a few days to try and deliver the aid.”

The tiny Gaza strip has been put under a strangling blockade after Hamas took over control of it in 2007, causing hardship to the 1.5 million living in what is called the “world’s biggest prison on earth.”

But because of the siege, Gaza has not been able to bring the materials needed to rebuild including construction material like cement, glass and bricks.

Posted by Action Center For Justice at 11:06 PM