The Hawaiian kingdom was overthrown in 1893 when a group of white businessmen forced Queen Liliuokalani to abdicate while U.S. Marines came ashore. 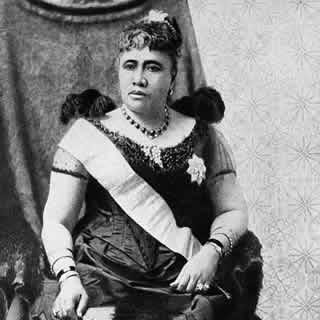 HONOLULU – Protesters will march the streets and Hawaiian chants will echo from the sprawling lawn of Iolani Palace on Hawaii's 50th anniversary of statehood, as high-minded panelists ponder the islands' future at a daylong conference.

About 1,000 demonstrators who would rather see Hawaii's independence restored are expected to rally outside the conference at the Hawaii Convention Center.

"We want to show how U.S. imperialism has spread across the Pacific and across the world," said Lynette Cruz, an organizer of the Hawaiian Independence Action Alliance. "It'll be fun."

The protesters will be allowed inside the convention center lobby, but they can't get into the individual conference rooms without purchasing a $30 ticket.

"We're trying to set a standard that embraces dialogue over physical conflict, and that's the hope for Friday," said Trisha Kehaulani Watson of Honua Consulting, one of the Hawaiian panelists. "We can show people that we can have concerns and be emotional without losing control."

American-flag-waving Statehood Day celebrants and Hawaiian sovereignty advocates clashed in 2006 at Iolani Palace, the heart of the Hawaiian monarchy where officials declared in 1959 that Hawaii had joined the union. The conflict turned into a shouting match between those trying to sing "The Star-Spangled Banner" and others who used a public address system to drown them out.

Last year, police arrested 23 members of a Hawaiian pro-sovereignty group that broke into the palace, locked its gates and posted signs that read, "Property of the Kingdom of Hawaiian Trust."

"The state is very cognizant of Hawaiian protests, and I think they don't want to have any bad press," said Dean Saranillio, a student who wrote his dissertation on how statehood came at the expense of Hawaiian self-determination. "There's a very vibrant and vocal Hawaiian community that's well-versed in the history. They know statehood was a product of the overthrow."

The Hawaiian kingdom was overthrown in 1893 when a group of white businessmen forced Queen Liliuokalani to abdicate while U.S. Marines came ashore.

About 94 percent of Hawaii voters supported statehood in 1959, but opponents argue the vote was tainted because the only choice on the ballot was to become a state or remain a territory — independence was not an option.

At sunset Friday, 18 Hawaiians will recite chants in memory of Queen Liliuokalani from the balconies of Iolani Palace, said Kippen de Alba Chu, chairman of the Statehood Commission. He said the chanters and the conference discussions will help set the stage for Hawaii's future.

"The tone is reflective. We're looking back where we came from and looking at our accomplishments, but perhaps also the things we need to do better," he said.

Back at the convention center, Hawaii's commemorative 50th anniversary postage stamp will be unveiled. The stamp, available nationwide Friday, will show a painting of a longboard surfer and two paddlers on an outrigger canoe.

The day's events will end with a '50s-style concert by The Platters, the Coasters and the Drifters.

Other statehood events included a walking tour focused on the overthrow, with costumed guides and role-players along the way; a statehood mosaic unveiled earlier this month at the Honolulu airport with artwork from more than 8,000 students nationwide; TV and radio ads with "50 Voices of Statehood" interviews; and 50 time capsules buried around the state to be opened on the state's 75th anniversary in 2034.

Posted by Action Center For Justice at 1:23 PM