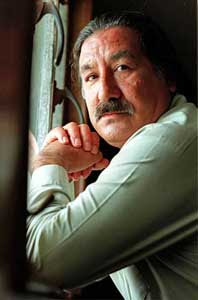 A wave of outrage swept the progressive community worldwide at the news that Native political prisoner Leonard Peltier was denied parole on Aug. 21. The U.S. government said Peltier will not be eligible for another parole hearing until 2024, when he will be 79 years old.

Peltier, framed up by the FBI for the 1975 shooting of two FBI agents at Pine Ridge Reservation in South Dakota, has been unjustly imprisoned since 1976. He is an international symbol of the U.S. government’s refusal to respect Native nations and sovereignty and a symbol of the corruption of the U.S. criminal “justice” system.

But Peltier is not just a symbol. He is “ikce wicasa,” the Lakota phrase meaning “human being.” He has been held captive for more than 12,000 days–six years longer than South Africa’s Nelson Mandela was imprisoned.

The feds have tried to have Peltier assassinated in prison. He has been put in solitary confinement countless times. He is currently imprisoned in Lewisburg, Pa., far from his family and his reservation. Peltier, now 64, grows increasingly ill from diabetes, vision and prostate problems, and other medical issues. Like all prisoners, he receives inadequate medical care.

Peltier’s children have grown up without him, and he has never been able to hold his grandchildren. He longs to walk the land and see the night sky, to eat a meal of his own choosing, to gather with his family and friends, to live among his people once more. Peltier, a man whose only crime has been to fight for Native rights and sovereignty, languishes in prison solely because of the dishonesty and arrogance of the U.S. government and its Federal Bureau of Investigation.

Despite everything, Peltier’s spirit is not crushed. His supporters cannot allow themselves to be discouraged. Peltier depends upon his supporters to transmute our outrage into action and educate others about his case.

The Leonard Peltier Defense/Offense Committee is considering its next steps, and meanwhile it wishes “to thank our thousands of supporters for their tenacious efforts, in particular during the months leading to Leonard’s recent parole hearing. Currently we are in the process of finalizing plans for efforts around exercising our right to challenge this decision, advocating for intervention by President Barack Obama, and succeeding in getting both proper medical attention for Leonard and a transfer to a federal prison closer to home. We will be issuing directives within the near future.”

For more information on Peltier’s case and the struggle to free him, visit www.whoisleonardpeltier.info. Cards and letters may be sent to Leonard

Mahtowin is co-leader of United American Indians of New England.

Following are excerpts from an Aug. 21 statement released by Eric Seitz, a defense attorney for Leonard Peltier:

Despite judicial determinations that the unrepentant FBI fabricated evidence and presented perjured testimony in Leonard Peltier’s prosecution; despite a jury’s acquittal on grounds of self-defense of two co-defendants who were found to have engaged in the same conduct of which Mr. Peltier was convicted; despite Mr. Peltier’s exemplary record during his incarceration for more than 33 years and his clearly demonstrated eligibility for parole; despite letters and petitions calling for his release submitted by millions of people in this country and around the world including one of the judges who ruled on his earlier appeals; and despite his advanced age and deteriorating health, the Parole Commission today informed Mr. Peltier that his “release on parole would depreciate the seriousness of your offenses and would promote disrespect for the law,” and set a reconsideration hearing in July 2024.

This is the extreme action of the same law enforcement community that brought us the indefinite imprisonment of suspected teenage terrorists; tortures and killings in CIA prisons around the world. ... These are the same institutions that have never treated Indigenous peoples with dignity or respect or accepted any responsibility for centuries of intolerance and abuse.

At his parole hearing on July 28, Leonard Peltier expressed regret and accepted responsibility for his role in the incident in which the two FBI agents and one Native American activist died as the result of a shootout on the Pine Ridge Reservation. Mr. Peltier emphasized that the shootout occurred in circumstances where there literally was a war going on between corrupt tribal leaders, supported by the government, on the one hand, and Native American traditionalists and young activists, on the other.

Accordingly, it is not true that Leonard Peltier participated in “the execution style murders of two FBI agents,” as the Parole Commission asserts, and there never has been credible evidence of Mr. Peltier’s responsibility for the fatal shots, as the FBI continues to allege.

Moreover, given the corrupt practices of the FBI, ... it is entirely untrue that Leonard Peltier’s parole at this juncture will in any way “depreciate the seriousness” of his conduct and/or “promote disrespect for the law.”

We will continue to seek parole and clemency for Mr. Peltier and to eventually bring this prolonged injustice to a ... fair resolution.

Posted by Action Center For Justice at 5:05 AM