More and more, U.S. imperialism is making Pakistan a battleground in its ugly war to achieve unchallenged control of western Asia. And more and more, the Pentagon’s cold, high-tech ratcheting up of death and destruction is driving the Pakistani people into open resistance.

Mountain villages that once rarely saw a car are now the targets of pilotless drones—the latest deadly gimmick in a remote-controlled war where the actual pilots sit in Arizona or Nevada. These automatons of the U.S. Air Force, trained on computer games to have absolutely no conscience or sense of humanity, push buttons that tell the Predator and Reaper drones to rain down real bombs and Hellfire missiles on their targets, incinerating whole families. How can they then go home at the end of the day and react with normal human feelings? Ah, but the U.S. military has hired whole schools of people with degrees in psychology to help them shake off any feelings of guilt or shame.

This is the total moral bankruptcy that a permanent warfare state produces. It is the mindset cultivated by a ruling class that values the world’s people only as labor to be exploited in pursuit of profit—all in the name of “progress” and “development.” Those who stand in the way, even if they are only defending the land and homes that sheltered their folk back into the mists of time, are expendable.

But to hear the generals and the politicians in Washington tell it, the U.S. is very worried about the “stability” of Pakistan. Joint Chiefs of Staff head Adm. Mike Mullen says he is “gravely concerned” about Taliban advances in Pakistan and Afghanistan. National security adviser Gen. James L. Jones described the situation in Pakistan as “one of the very most serious problems we face.” Secretary of State Hillary Rodham Clinton even called Pakistan a “mortal threat” to the U.S. because it possesses nuclear weapons.

These highly publicized statements are meant to soften up the population here for even more U.S. intervention in Pakistan. They also provide Congress with an excuse to pass another whopping “supplemental” bill, now circulating in Congress and reported to have risen to $94 billion. (See "Shameful Vote in the House Passes War Funding Bill")

This amount is just to pay for the wars in Iraq, Afghanistan and now Pakistan. Since 9/11, the total spent on these supplemental appropriations—which are above and beyond the regular Pentagon budget—will add up to almost $1 trillion. In addition, the Pentagon routinely gets more than half a trillion dollars every year, supposedly to keep us all “safer,” even as tens of millions lose their homes and jobs because of the capitalist economic crisis.

According to an article in Congress Daily, the current supplemental bill includes “$400 million to train and equip the Pakistan military, a central piece of the new strategy for Pakistan and Afghanistan announced by President Obama last month.”

Pakistan has suffered for decades under a series of military dictatorships supported by Washington and the Pentagon. The result has been great wealth for a few well-connected families and abysmal poverty for the vast majority. A rebellion against the last military dictator, Gen. Pervez Musharraf, ushered in a civilian government but one that is weak, corrupt and afraid to go against U.S. dictates. This has only fueled the Islamic opposition, which is strongest in the border areas with Afghanistan where the Pentagon has been openly violating Pakistan’s sovereignty for some time, bombings its villages with pilotless drones and staging attacks by Special Forces troops.

Thousands of people began fleeing the region when the Pakistani army, under strong pressure from Washington, began an offensive just one day before President Asif Ali Zardari was scheduled to meet President Barack Obama in Washington. Some half a million have been made refugees since the fighting began.

The U.S. wars in Iraq and Afghanistan created this terrible situation in Pakistan. The people in the U.S. showed in 2006 and 2008 that they don’t want any of these wars. But elections don’t end imperialist wars. Only the independent, militant struggle of the people can bring the troops home and stop the killing.

New York - Inside the Roosevelt Hotel in busy midtown Manhattan on May 10, Pakistani President Asif Ali Zardari was trying to reassure some 300 members of the expatriate community that his just-completed visit to Washington was not a capitulation to U.S. pressure. 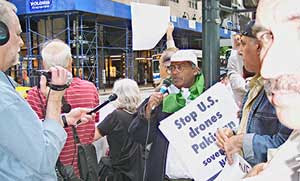 But outside, a vigorous demonstration denounced the bloody government offensive in the Swat Valley that has caused more than half a million Pakistanis to flee their homes. In speeches and chants, delivered in Pashtun and other Pakistani languages as well as in English, the crowd of Pakistanis and their U.S. supporters assailed the brutal bombings by the Pakistan Air Force, pointing out that every bomb and bullet was supplied by the Pentagon.

When the meeting in the hotel ended, a group of more formally dressed Pakistanis emerged who had been inside. They were furious at Zardari for “begging” for U.S. money and for walking out of the meeting before they could address him with their questions and comments. A dozen joined the demonstration and denounced the Pakistani president to the crowd and the media cameras.

In Washington on May 7, Zardari had pledged at a joint news conference with Afghan President Hamid Karzai and U.S. Sens. John Kerry and Richard Lugar that Pakistan would continue the offensive until it had defeated the “terrorists.”

He was using language created in Washington to describe Islamic forces opposed to the U.S. occupation of neighboring Afghanistan. To the people living in the border areas, however, the terrorists are those who send Predator and Raptor drones to launch Hellfire missiles into their homes and villages. For over a year, these pilotless planes sent by the Pentagon have rained down death and suffering on villagers in northwest Pakistan. The generals and the Western media then claim another victory against “terrorism.”

The anguish this has caused was apparent on the faces of the diverse group of Pakistanis. They came from various ethnic groups and expressed different political and religious views, but all called for an end to foreign interference in their country and a cessation of the military offensive.

A sizeable solidarity delegation from the International Action Center and Workers World Party came in support of the demonstration. Speakers emphasized that U.S. imperialism has been behind a long string of military dictatorships in Pakistan that have left the country divided between a highly privileged few versus an impoverished population.

They also addressed passersby on the street, pointing out how the billions of dollars spent to make Pakistan an ally of the Pentagon contribute to the growing impoverishment of the people here at home.

The demonstration was called by the Pakistan-U.S. Freedom Forum, which has been tireless in organizing the community against repression in their home country.
Articles copyright 1995-2009 Workers World. Verbatim copying and distribution of this entire article is permitted in any medium without royalty provided this notice is preserved.

Posted by Action Center For Justice at 3:19 PM