For Displaced Iraqis, 'No Life'

Camp Residents in Kurdish No Man's Land Are Left Without Aid
By Nada Bakri, Washington Post, May 24, 2009 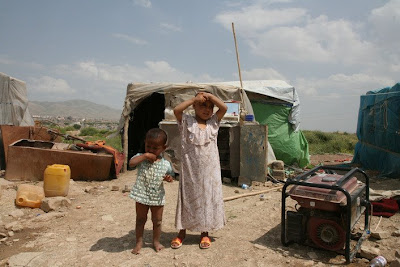 SULAYMANIYAH, Iraq -- Mohammad Jaffar cast his eyes toward a barren patch of land he calls home.

Jaffar and 400 other Iraqi Arabs have lived here in a squalid camp, along a road that seems to lead nowhere, since they were driven from their homes in the sectarian bloodshed that plunged the country into chaos in 2006 and 2007.

The camp illustrates some of the problems Iraq faces as it attempts to build the institutions of a modern state: Although there is a semblance of peace, the country remains riddled with fault lines of sect and ethnicity, and saddled with competing authorities. Jaffar and his neighbors live at the intersection of those realities. They cannot return home, and they cannot rebuild their lives, a situation that threatens to make a temporary solution permanent.

Iraq has witnessed many tragedies, with tens of thousands dead in what amounted to a civil war. But added to the hardship of these displaced Iraqis is a feeling of helplessness. In a no man's land in the suburbs of this city in the Kurdish autonomous region in northern Iraq, the families deem themselves the victims of Kurdish officials who have no interest in helping them and a distant government in Baghdad whose authority falls too short to provide assistance here. Humanitarian agencies complain that they encountered difficulties when they tried to help.

"This is what the war did to us," said Intissar Saadou, whose tent is next to Jaffar's.

An unbearable stench hung over the brown, blue and yellow tents, aggravated by an occasional wind. But perhaps because of their past, none of the refugees seemed bothered by it. In September 2006, soon after the onset of some of the worst sectarian killing, they boarded minivans and buses that took them through perilous territory. By their own account, they arrived breathless.

Jaffar was one of the first to come.

A few weeks earlier, masked gunmen had knocked on his family's door in the Zayouna neighborhood of Baghdad. They threatened to kill the family members and burn the house down if they did not leave in two days, Jaffar said. The family stayed put. Three days later, gunmen killed his father as he headed to a nearby mosque for the dawn prayer. They found his corpse at noon, thrown on the side of a street, with three bullets in his head.

His mother was next. Days after her husband's death and caught in crossfire between militiamen and government security forces, she was killed as she hurried from one room of the house to another. Shortly afterward, Jaffar and his brother left, each buying a $10 bus ticket to Sulaymaniyah.

Although they are registered with the government in Baghdad, residents say that unlike others displaced by the fighting, most of them have received no financial assistance. In Sulaymaniyah, employment is almost impossible without a local sponsor. Some find work as day laborers; others beg on the city streets or go door to door asking for food and clothes.

There is no electricity. Water is trucked in, and garbage is strewn across the camp. Attempts by aid agencies to install latrines were blocked by local officials.

"Local authorities were not welcoming them," said Charles Lynch, head of the U.N. High Commissioner for Refugees office in Irbil, capital of the Kurdish region. "They did not want them there."

Kurdish officials seemed to agree. "It is political," said Hiwa Jaff, a spokesman for the Kurdish government in Sulaymaniyah. "The central government does not want to help them. I think they should take care of them."

That sense of abandonment, heightened by the sometimes arbitrary realities of geography and politics, courses through the camp.

Saadou, Jaffar's neighbor, sat cross-legged on the shabby beige mattress on the floor of her tent. With her husband's lighter, she started a rickety burner on a kerosene tank and placed a frying pan on top. She waited a few minutes to hear the oil crackle, then added fresh fish caught from a nearby river.

"It is much better here," she said. "I am happy to endure this hard life than go back and get killed."

Her husband, Yass Khodayr, a former policeman, said that in 2007, gunmen in a village in Diyala province asked him for $15,000. They said they would kill his family, he recalled, if he failed to pay. He asked for two days to gather the money. The next morning, he fled to the camp with Saadou and their daughter, Hoda, then 2 years old. Their other child, Mohammed, was born in the tent. Khodayr now works in construction, earning $15 a day, half of which he spends on food and cigarettes.

Although a fragile normalcy has returned to Baghdad and other parts of Iraq, memories shape Khodayr's perspective. He remains scared.

"If I know it is safe, if the government was strong, I would go back this minute," he said. "For now, we will remain stranded here. There is nowhere to go and no one to help us."

Posted by Action Center For Justice at 11:12 AM